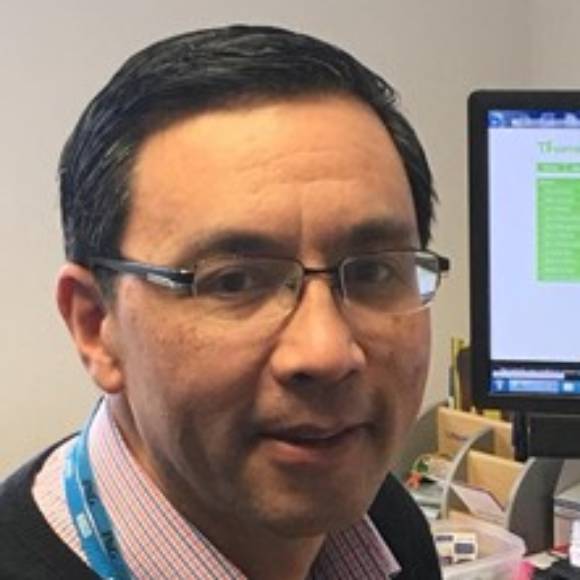 I was born in Blackburn, with parents from Burma and Singapore who came to work in London for the NHS in the 1960s. I was educated to secondary school level in Southend, Essex and then read a Pharmacology degree at Kings College London before starting Medicine at the Royal London Hospital in Whitechapel. Whilst at College I used to work in my Mum’s Care Home ‘The Grange’ and developed an interest in the inequality of care for Older People writing a Student Prize winning essay for the British Geriatrics Society in 1991 (the Amulree prize).

I stayed on at the Royal London Hospital in 1993 for my first House job in Respiratory, Oncology and Haematology Medicine before I decided to pursue a career in General Practice. I trained on the Windsor Vocational training scheme and did my training year at Runnymede Medical Practice. I was fortunate to stay on in the Practice after qualification and joined as a partner in 1997 and I continue to work clinical sessions here to this day. I visit a care home on one or two sessions a week. I am passionate about the role of GPs not only in the delivery of healthcare but also in leading Health systems by working to improve the health of populations whilst living within the allocated health resources.

I became a board member of the Windsor and Ascot Primary Care Group in 1999 and took on a lead role for Older People’s Services, developing local falls services and working with the local authority on an Older People’s Partnership Board. As the PCG transitioned to Trust status, I continued to support the PCT until about 2005 when I left to take on a role as Medical Director for East Berkshire Out of Hours. I returned to work as a locality lead in Berkshire East PCT in 2012 in preparation for Clinical Commissioning.

I was elected as Clinical Chair for Windsor, Ascot and Maidenhead CCG in 2013 and took the CCG from authorisation to its merger in 2018. In that time the CCG went from a position of requiring improvement to outstanding performance for its last 2 years. I was supported in my own leadership development undertaking the Kings Fund Collaborative Leadership programme in 2013 and the Top Leaders programme (now the Director Programme) in 2015.

In 2015 I supported the NHS Confederation’s commission on examining care gaps in urgent care for Older people which led to the publication of ‘Growing Old Together’ in 2016. In the same year I was also elected to the board of NHSCC as a regional representative and supported the wider context nationally of Clinical Commissioning until April 2019 when I decided to leave my locality lead role on the governing body of East Berkshire CCG. I remain involved in the Frimley Leadership and Improvement Academy as an executive board member and help deliver the 2020 and Wavelength programmes. I also support the Frimley ICS as a clinical lead in the Integrated Care Decision work stream, the Frailty advisory Board and the Connected Care Programme.

In October 2019 I was appointed National Clinical Director for Older people and Integrated Person Centered Care, NHS England & NHS Improvement and I support our clinical team for the Ageing Well programme.